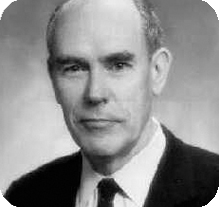 For his pioneering and visionary contributions to computer graphics, starting with Sketchpad, and continuing after.

Ivan Edward Sutherland was born May 16, 1938 in Hastings, Nebraska, United States. His ancestry is from Scotland and New Zealand, despite his claim that he was named for his mother’s fictitious Russian lover. His father was a practicing engineer with a Ph.D. in civil engineering. His mother was a teacher who engendered in him and his brother Bert a love of learning.

In 8th grade he built a gantry crane with surplus motors brought home by his father. His favorite subject in high school was geometry. Sutherland describes himself as a visual thinker (“If I can picture possible solutions, I have a much better chance of finding the right one”), which led to his interest in computer graphics.

His first computer processing experience was with a computer called SIMON, a relay-based computer with six words of two-bit memory, which was lent to the Sutherland household in 1950 by its designer, Edmund Berkeley, one of the founders of the ACM. Its 12 bits of memory permitted SIMON to add up to 15. Sutherland's first significant program allowed SIMON to divide. To make division possible, he used a table look-up and added a conditional stop to SIMON's instruction set. His brother Bert participated by making the modifications to the hardware. This program was a significant accomplishment—it was the longest program ever written for SIMON, requiring eight feet of paper tape.

Sutherland was one of only a few young students writing computer programs during that era. For a 12th grade science fair project, he made a magnetic drum memory with 128 2-bit words. At age 19, he published “An Electro-Mechanical Model of Simple Animals” [6] in Computers and Automation. At age 21 he published “Stability in Steering Control” [7] in Electrical Engineering.

After graduating from Scarsdale High School (20 miles north of New York City) in 1955, Sutherland attended Carnegie Institute of Technology (now Carnegie Mellon University) on a full scholarship, which made it affordable for him. He received a Bachelor of Science Degree from Carnegie in 1959, a Master of Science Degree from the California Institute of Technology in 1960 (which, he claims, he selected to get as far as possible from his new mother-in-law), and a Doctor of Philosophy Degree in Electrical Engineering from the Massachusetts Institute of Technology in 1963. His doctoral thesis supervisor was Claude E. Shannon, who is often referred to as the “father of information theory. Sutherland also received an Honorary Master of Arts Degree from Harvard University in 1966.

His doctoral thesis, Sketchpad: A Man-machine Graphical Communications System, described the first computer graphical user interface (GUI). Sketchpad was developed on a unique computer, the TX-2, built by Wesley Clark. In early 1960s computers ran "batches" of jobs, but were not interactive. The TX-2 was an "on-line" computer used to investigate surface barrier transistors for digital circuits. It had a variety of input and output devices, including a nine inch CRT with a 512 x 512 array of directly-addressed pixels and no hardware character generator. For software it had virtually nothing—no operating system, just a macro assembler. But it had a light pen, first used on the SAGE air defense project for identifying computer-drawn objects. Sutherland used it to do something new: allow the user to draw directly on the computer display. The light pen provided coordinates for drawing commands entered using the keyboard. Previously drawn primitive objects could be recalled, rotated, scaled and moved. Finished drawings could be stored on magnetic tape and edited at a later time. Sketchpad introduced important innovations including hierarchical memory structures to organize objects and the ability to zoom in and out.

Sketchpad was a groundbreaking interactive computer-aided design system. Its innovations included hierarchical drawings, constraint-satisfaction methods, and an interactive GUI. When asked, “How could you possibly have done the first interactive graphics program, the first non-procedural programming language, the first object oriented software system, all in one year?” Sutherland replied, “Well, I didn't know it was hard1.” Sketchpad's graceful interaction and functionality continue to inspire admiration among computer graphics professionals.

After graduating from MIT in 1963, Sutherland accepted a U.S. Army commission to fulfill his obligation for military service. He was assigned first to the University of Michigan, and then to the National Security Agency as an electrical engineer, mainly because he knew about computers. In 1964, at age 26, First Lieutenant Sutherland replaced J. C. R. Licklider (who returned to private industry) as the head of the U.S. Department of Defense Advanced Research Project Agency's (DARPA) Information Processing Techniques Office (IPTO). DARPA was started in response to Sputnik to develop technology for putting a U. S satellite in space. As head of this office Sutherland was given $15 million a year to sponsor computer research, particularly in the areas of timesharing and artificial intelligence.

From 1965 to 1968, Sutherland was an Associate Professor of Electrical Engineering at Harvard University. Work with student Danny Cohen in 1967 led to the development of the Cohen–Sutherland computer graphics line clipping algorithm for removing parts of lines that extend beyond the viewing region. In 1968, with the help of student Bob Sproull, he created the first virtual reality and augmented reality head-mounted display system, referred to affectionately as the Sword of Damocles because it was suspended from the ceiling above the user’s head.

From 1968 to 1974 Sutherland was a Professor of Computer Science at the University of Utah. Among his noted students there were Jim Clark (who designed a virtual reality system and went on to found Silicon Graphics, Netscape, and WebMD), and Henri Gouraud (who devised the Gouraud smooth-shading technique to make a surface approximated by polygons look smooth). He served as a PhD committee member for other famous Utah graduates Alan Kay (inventor of the Smalltalk language and 2003 Turing Award recipient) and Edwin Catmull (co-founder of Pixar and later President of Walt Disney and Pixar Animation Studios).

Starting in the mid-1970s, Sutherland was affiliated with the RAND Corporation, and investigated making animated movies—an undertaking well ahead of its time.

From 1974 to 1978 he was the Fletcher Jones Professor of Computer Science at California Institute of Technology, where he was the founding head of that school's Computer Science Department. One area of emphasis was teaching engineers how to design integrated circuits. In 1980 he founded a consulting firm, Sutherland, Sproull and Associates, and served as its Vice President and Technical Director. It was purchased by Sun Microsystems in 1990 to form the seed of its research division, Sun Labs. Sutherland became a Fellow and Vice President at Sun Microsystems.

Sutherland was a visiting scholar in the Computer Science Division at University of California, Berkeley from 2005 to 2008.

Other prominent work includes the characterization and categorization of hidden surface algorithms at the University of Utah (1974), and the Trojan Cockroach, a six-legged walking machine built at Carnegie Mellon University (1983).

During his career Sutherland has obtained more than 60 patents.

In 2006 Ivan Sutherland married Marly Roncken, with whom he established the Asynchronous Research Center at Portland State University to develop self-timed asynchronous computers without the central clocks that must otherwise accommodate the slowest components.

Notable quotes attributed to Sutherland include:

Words of wisdom include:

1Quoted by Alan Kay in 1987, in a University Video Communications video,
http://www.archive.org/details/AlanKeyD1987.