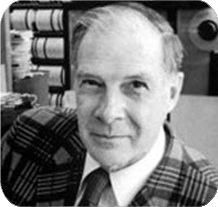 Richard Hamming's classic paper Error detecting and error correcting codes appeared in April 1950 in the Bell System Technical Journal. Today we live in a digital age and it is well known that digital information is a sequence of 0s and 1s. When Hamming was thinking about digital information in the late 1940s, it was understood by only a few experts.

In performing calculations, computers transmit information internally as sequences of 0s and 1s. Digital information transmitted over distances is of the same form. Although at first glance it seems restrictive to use messages consisting only of 0s and 1s, in fact it places no restriction on what is sent. For example, numbers can be sent in binary, so that base 10 numbers 1, 2, 3, 4, 5, 6, 7, 8 are sent as 1, 10, 11, 100, 101, 110, 111, 1000. Letters can be sent as short binary codes.

It was an event in 1947 that prompted Hamming to undertake his most famous piece of work. One Friday, while working for Bell Laboratories, he set their pre-computer calculating machines to solving a complex problem and expected the result to be waiting for him when he began work on the following Monday. But when he arrived on Monday, he found that an error had occurred early on in the calculations and the relay-based calculators had been unable to proceed.

Think about sending a single digit, either 0 or 1, with its parity check digit to the left. There are two possible valid words: 0,0 and 1,1. Call the valid words code words. Then if 0,1 or 1,0 is received, we know from the parity check that an error has occurred. In other words, 0,1 and 1,0 are not code words. However, if 0,1 is received, there is no way of knowing whether 0,0 or 1,1 was originally sent.

Let us now add a further parity check digit, again to the left. We then have the code word 1,1,1 where the middle 1 gives even parity with the original right-most 1 and the left-most 1 also gives even parity with the original right-most 1. Putting in the same two parity checks for sending 0 gives the code word 0,0,0. Now suppose a single error occurs in sending a code word and 1,0,1 is received. Since the parity check for 0,1 fails, the error occurred in one of these entries. Since the parity check for the first and third entries is valid, it must be the second entry that is in error, and we can correct it. Thought of another way, 1,0,1 is at Hamming distance 1 from 1,1,1 and Hamming distance 2 from 0,0,0; if a single error occurred then 1,0,1 must have originally been 1,1,1.

We have described Hamming’s method to correct a single error in a block of transmitted data. In his 1950 paper he also presented a method which corrects a single error while simultaneously detecting when two errors occur. He further showed that, in a mathematical sense, these error correcting codes are the best possible codes; there are none shorter.