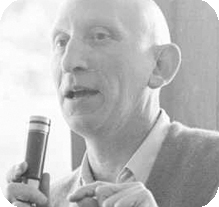 For his influence in the area of advanced programming techniques and compiler construction.

Alan J Perlis was born on April 1, 1922 into a Jewish family in Pittsburgh, Pennsylvania. He attended primary schools in his hometown, starting with the Colfax Public School in his Squirrel Hill neighborhood. In 1933 Perlis enrolled in the public but prestigious Taylor Allderdice High School. Six years later he entered Carnegie Institute of Technology and graduated with honors in Chemistry on December 20 1942.

Two days after graduation, Perlis started his war-time experience: on the morning of December 22 he signed up for the Aviation Cadet Meteorology Program of the US Army Air Force. After nine months of training he became a 2nd lieutenant in the meteorology services. He was assigned to the Army Air Force Intelligence School in Harrisburg, Pennsylvania, a training center for photo interpretation and combat intelligence. Perlis was later sent to the operational headquarters of the 9th US Army Air Force in the United Kingdom, where he served for eighteen months as intelligence officer and weather officer with a reconnaissance squadron.

In September 1945, he returned to civilian life and enrolled in the California Institute of Technology for graduate study in chemistry. He quickly realized that this was not his passion and switched to the study of mathematics at the Massachusetts Institute of Technology. At MIT Perlis carried out research on numerical analysis methods, under the supervision of Philip Franklin, which led to the completion of a master thesis in 1949 (The solution of linear integral equations by iterative methods) and a PhD dissertation in 1950 (On integral equations, their solution by iteration and analytic continuation).

More relevant for Perlis’ future career was Philip Franklin’s involvement with Project Whirlwind, MIT’s digital computer project. By 1946 Project Whirlwind had evolved to become the blueprint for the construction of an ambitious digital computer capable of providing rapid solutions to all types of simulations and control problems, such as tracking the motion of aircraft. Franklin was head of the Mathematics Group, which was responsible for the preparation of software programs for the planned machine.

Project Whirlwind was the introduction to modern computing for many young MIT graduates. Graduate students with military experience, like Perlis, were invited to collaborate on the project on part-time basis. During the summers of 1948 and 1949 Perlis assisted Franklin’s team with coding basic programs for the still-unfinished computer, and in surveying known numerical methods, looking for those that would be a good fit with the characteristics of the Whirlwind when it became operational.

After receiving his PhD in mathematics, Perlis spent 1951 in the Ballistic Research Laboratory (BRL) at Aberdeen Proving Ground, Maryland, where he worked on the computation of ballistics tables. Like Project Whirlwind, Aberdeen Proving Ground was a cradle of new research on computer design, programming, and numerical methods. It was one of the first multi-machine computing installations, housing three different computers: ENIAC (transferred to BRL in 1947), EDVAC (transferred in 1949), and ORDVAC (transferred in the spring of 1951).

In January 1952 Perlis came back to the finished and operational Project Whirlwind, now renamed the MIT Digital Computer Laboratory. This time Perlis was assigned to Robert Wieser’s team in charge of Project Cape Cod, a prototype system to automate the detection of enemy aircraft. Operational in 1953, the Cape Cod system established the basis for the first full-scale automatic air defense system, SAGE (Semi-Automatic Ground Environment).

Perlis did not stay long at MIT. In September he joined the Statistical Laboratory at Purdue University, which was expanding its activities under the leadership of Carl F. Kossac. In 1952 Purdue's Statistical Lab was about to receive an IBM card-programmed electronic calculator (CPC), an assembly of basic accounting equipment sophisticated enough to require the services of someone skilled in modern computing technology. On the recommendation of Alex Orden (one of Perlis’s colleague at MIT), Kossac recruited Perlis both as an assistant professor in the Mathematics Department and as the director of the computational division of the Statistical Laboratory.

At Purdue Alan Perlis began the research that would lead him to eminence. Shortly after his arrival, Perlis persuaded Kossac and the university administrators to purchase the best medium size computer available at that time, the Datatron 205. In early 1955, Perlis’ team began the design of a “mathematical language compiler” for it, later named the IT language (for Internal Translator).

IT was a “compiler”—a set of programs that automatically translate programs written in a notation similar to that of mathematics into machine code. In this respect IT was not very different from IBM’s Fortran language, which was also under development at that time. IT was interesting in that its logical structure was sufficiently independent of the Datatron 205 to allow for implementations on other computers with only few modifications. This relatively machine-independent character of IT was developed earlier than most higher level languages.

In 1956 Perlis left Purdue to accept a position as associate professor of mathematics and director of the computation centre at the Carnegie Institute of Technology (now Carnegie Mellon University). There he completed the first version of IT on an IBM 650 computer. Soon IT became adopted by many university computing installations as an alternative to Fortran, which, at first, was only available for much larger and more expensive computers. In this way, IT contributed much to stimulate research on programming techniques. Perlis’ IT seemed to hint at a way towards a universal language or at least towards a small set of mutually translatable languages. Perlis himself was to play an important role in this process.

In the spring of 1957 representatives of the user groups SHARE (IBM), USE (UNIVAC) and DUO (Datatron) requested that ACM evaluate the prospects of a “universal programming language”—a language capable of transcending the characteristics of particular machines and allowing the creation of machine-independent programs for many kinds of applications.

This led to contacts between the ACM and a German-Swiss group of programming specialists led by Heinz Rutishauser and Friederich L. Bauer. In May 1958, under the leadership of Perlis, a small group of ACM representatives met in Zurich with the German-Swiss group. This meeting resulted in the definition of the International Algorithmic Language (IAL) and its publication as report [4] in the Communications of the ACM, of which Perlis had become the first editor-in-chief. In the next year, IAL was renamed ALGOL (for Algorithmic Language) and was widely discussed in forums like Communications of the ACM, which resulted in a new definition of the language in early 1960 called ALGOL-60.

Arguably one of the most influential programming languages in history, ALGOL-60 had a very complex and controversial history in its early years. Nevertheless, ALGOL-60 brought about a qualitative leap forward in the understanding and acceptance of programming as a legitimate object of study, not just a practical necessity for getting a computer to work. In this regard, Perlis played an important role in turning ALGOL into a model for programming research, for example by working with his colleagues at Carnegie on several extensions of the language, and by publicly arguing [2] for the centrality of programming languages and algorithms as a defining concept of computer science.