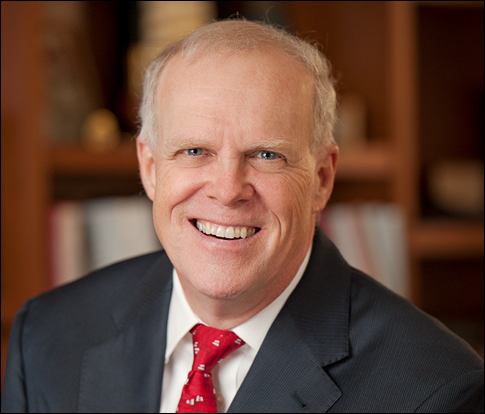 For pioneering a systematic, quantitative approach to the design and evaluation of computer architectures with enduring impact on the microprocessor industry.

John L. Hennessy, born in 1952, was raised on Long Island’s north shore in Huntington, New York. His mother was a teacher before retiring to raise six children; his father was an electrical engineer. He was a tinkerer in high school, winning a science fair prize for an automated tic-tac-toe machine. This impressed the mother of his senior prom date, Andrea Berti, a girl he knew from his shelf-stocking job at the local King Kullen grocery store. He enrolled at Villanova University near Philadelphia, earning a bachelor’s degree in electrical engineering (1973). For graduate school, he returned to Long Island, attending Stony Brook University (then S.U.N.Y. Stonybrook), married Andrea in 1974, and garnered a master’s (1975) and Ph.D (1977) in computer science.

His work centered on computer architecture. In 1980, microcomputers were rapidly advancing in complexity, to challenge the capabilities of minicomputers. The prevailing wisdom was that powerful processors needed very large, very rich instruction sets. As Hennessy observed in his Turing award lecture, “Microcomputers were competing on crazy things like here’s my new instruction to do this kind of thing … rather than saying here’s a set of standard benchmarks, and my machine is faster than your machine….”[1]

Hennessy won fame by challenging this mindset with his work on reduced instruction set computer architectures (RISC), along with David Patterson, a Berkeley professor. They first met at a microprocessor conference in 1980 where each was presenting similar micro-coding concepts. Hennessy recalled that “like Dave at Berkeley, we started with a clean slate with our graduate student class that was sort of a brainstorming class. We had a unique perspective. People were ignoring basic performance implications completely. It was an efficiency argument from the very beginning…. We both built prototypes of our design, and we could see that the advantages were clear. These were academic prototypes built by graduate students.”

Building on the original RISC work of John Cocke at IBM, in 1983, Hennessy’s Stanford team developed a prototype chip named MIPS (Microprocessor without Interlocked Pipeline Stages). The first MIPS chip used 25,000 transistors and ran at a slightly faster clock speed than a similar Berkeley chip called RISC-2 (40,760 transistors).[2] To advance and commercialized this technology he co-founded MIPS Computer Systems in 1984, during a sabbatical from Stanford. He served eight years as their chief scientist, and six more as chief architect. MIPS was later acquired by Silicon Graphics, where its processors, combined with custom graphics developed by James Clark at Stanford, powered the high-performance graphics workstations relied on by Hollywood in the late 1980s and 1990s.

Patterson recalled that: “There is this remarkable point in time when it was clear that a handful of grad students at Berkeley or Stanford could build a microprocessor that was arguably better than what industry could build—faster, cheaper, more efficient…. RISC was very controversial, it was heretical… and John and I were on the RISC side while all the other people were on the CISC side…. We had a hard time convincing people of that.” [3]

While others argued about the relative merits of the Hennessy and Patterson variants of RISC, they recognized that the much larger contest was between RISC ideas embodied in both of their chips versus the CISC (Complex Instruction Set Computing) architectures then used throughout the industry from mainframes to personal computers. The two began a partnership, creating a systematic quantitative approach for designing faster, lower power and reduced complexity microprocessors, co-authoring two books that became landmark textbooks for the discipline. The first, Computer Architecture: A Quantitative Approach, now in its sixth edition, established enduring principles for generations of architects. [4]

Patterson quantified the impact of this work in his Turing lecture, given jointly with Hennessy: “Our colleagues at Intel … had great technology…. They got up to 350 million chips per year, not only dominating the desktop, but servers as well…. But the Post-PC era, starting with the iPhone in 2007 totally changed things… valuing area and energy as much as performance. Last year there were more than 20 billion chips with 32-bit processors in them. [Intel compatible] chips peaked in 2011 with dropping sales of PCs, and there are only 10 million chips in the cloud, so 99% of the processors today are RISC.” [5]

Hennessy’s career at Stanford led him from research to administrative leadership. Within five years of becoming department chair in 1994 he was appointed Provost, working with his former colleague, Jim Clark (founder of Silicon Graphics) to arrange a record-setting donation to create a biological engineering and sciences center. Clark said of Hennessy: “The most lasting impression was how good he was with students, how hard he worked and how helpful he was with my project." [6] In another year he rose to the top of a pool of five hundred candidates to became president of Stanford, helped by his exceptional connections to Silicon Valley’s high-tech industry. He co-founded Atheros as well as MIPS, and he served many years on the Cisco Systems Board of Directors, and subsequently on the Google Board, where in 2016 he became chairman of Alphabet, Google’s parent company. Under his leadership Stanford’s fundraising brought in $13 billion,” [7] including a five-year campaign from 2007-2011 that $6.23 billion, 60% more than the previous record for any university.[8]

During sixteen years as president, Hennessey reshaped Stanford’s buildings, the campus, its research profile, and its financial resources. An appreciative article in Stanford Magazine catalogued his accomplishments of his term: “70 building projects,” a cultural shift on campus to “a deep commitment to interdisciplinary collaboration,” and the “deft and decisive handling of” of the challenges of a major recession. Maybe most importantly, and surprisingly to many, was Hennessy’s devotion to students, to interdisciplinary studies, to the humanities, and the arts. Hennessy pushed for world-class performance and exhibition spaces, drawing on a comment from Itzhak Perlman that “Mr. President, Stanford is a great university, but you have terrible performance facilities.” Hennessy called this complaint “a gift to a president, because there’s a story I can repeat from an expert.” [9] Since retiring as president in 2016 he has been the inaugural director of the Knight-Hennessy Scholars program.

Fittingly, for the two RISC champions who took on the computer establishment in the 1980s, Hennessy and Patterson have returned to their first love—computing architectures—as they savor their joint selection as the 2017 ACM Turing award winners. Their Turing address challenged the idea that potential processor performance has little scope for dramatic improvement of the kind seen in previous decades. Not so: “innovations like domain-specific hardware, enhanced security, open instruction sets, and agile chip development” will multiple current system throughput “tens, hundreds, thousands of times—up to 62,000 times.” Their audience was listening as intently as ever.[10]

Hennessy has received numerous regional, national, and international awards, plus eleven honorary doctorates. His computing architecture awards include Fellows of IEEE (1991), American Academy of Arts and Sciences (1995), ACM (1997), and the UK Royal Academy of Engineering (2017). He received the Seymour Cray Computer Engineering award in 2001, and he was honored with IEEE’s highest honor, the Medal of Honor, in 2012, "for pioneering the RISC processor architecture and for leadership in computer engineering and higher education."

Hennessy and Patterson have won a number of joint awards, including the John von Neumann Medal (IEEE, 2000), the Eckert-Mauchly ACM/IEEE award in 2001; Fellows for the Computer History Museum in 2007, and the ACM Turing Award in 2017.

[7] Antonucci, Mike, “Where he took us,” Stanford Magazine, May-June 2016; https://stanfordmag.org/contents/where-he-took-us